Do you want to travel around Korea but are not sure where to go? Do you need to get out of the big city and get a breath of fresh air? Here’s some info about a short weekend trip you can take to the southern end of Korea in the South Jeolla Province (전라남도).

Yeosu and Suncheon are located in the middle of the southern coastline of the Korean peninsula. Yeosu was host to Expo 2012 and is known for Admiral Yi (이순신) and the Turtle Ship (거북선). Suncheon was host to the Suncheon Bay Garden Expo 2013 and is known for its scenic coastal wetlands and agriculture. You can enjoy both cities over a weekend and take in great views of the ocean and Korean coast line. In this blog post we’ll first look at Yeosu, stay tuned for the following post to learn more about Suncheon!

Getting to Yeosu is not expensive and is quite convenient by bus or train. Personally, I recommend taking the KTX train as it has a stop both in Suncheon and in Yeosu. A one-way fare is around KRW 45,000 and will get you from Seoul to Yeosu in less than 3 hours. You can save about KRW 20,000 by taking a slower train but the trip will take almost 5 hours. Buses are similar in price and duration to the slower train. 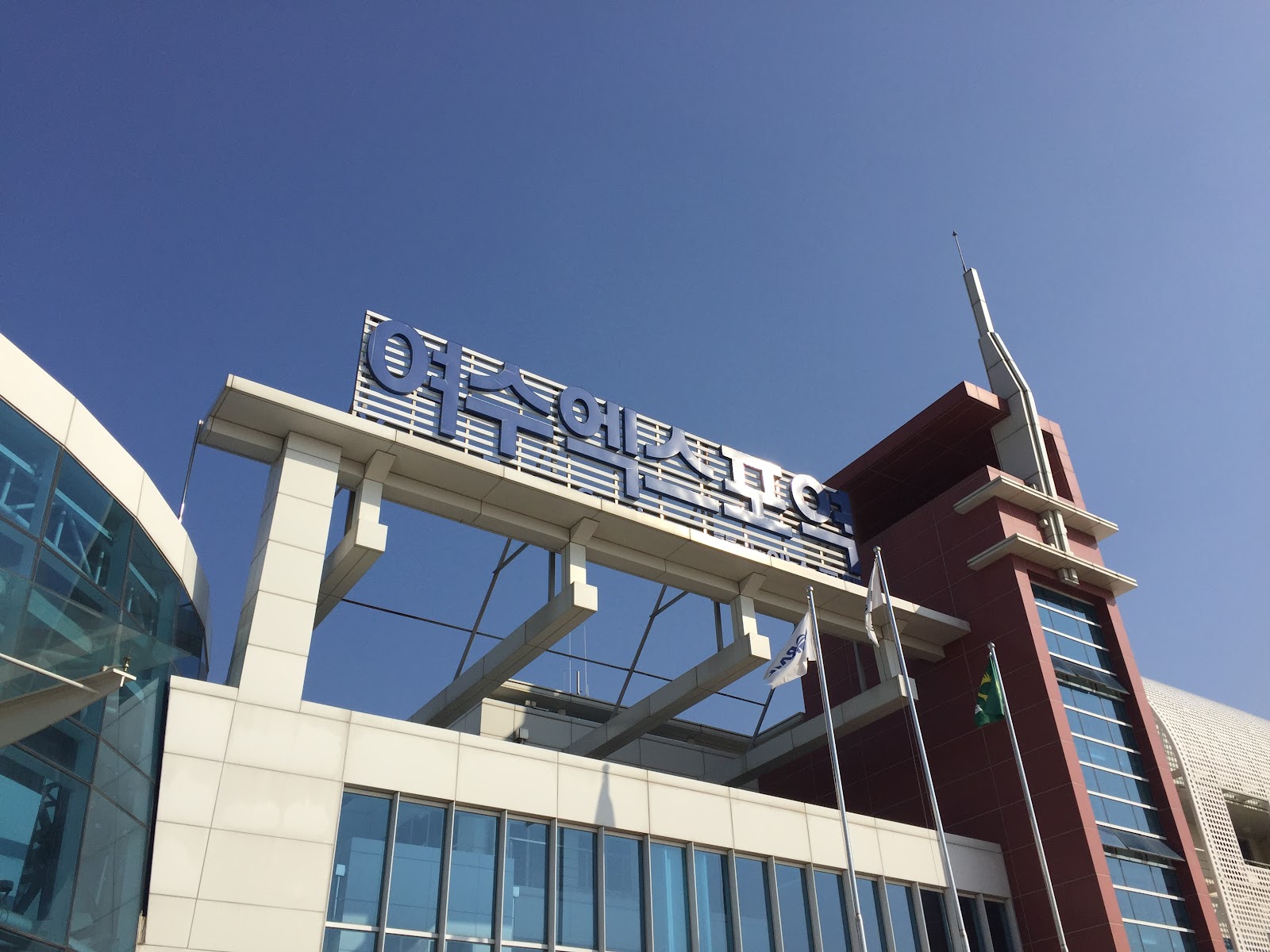 The major train station in Yeosu is the Yeosu-Expo Station and you will arrive right outside the Expo 2012 grounds making it convenient to start sightseeing right away. However, if you choose to take a bus down to Yeosu - the bus terminal is located closer to town and is a short taxi ride away from the train station. Taxi fares start at KRW 2,800.

The exposition grounds are still open to the public and offer direct views to the ocean. Some of the main buildings that are still in use today house restaurants, cafes, a wedding hall, meeting spaces, and even a guest house. Also on the expo grounds is Hanwha’s Aqua Planet hosting an aquarium featuring beluga whales and seals, a 4D theater, the Alive Museum (an optical illusion art museum), a food court, and a gift shop. 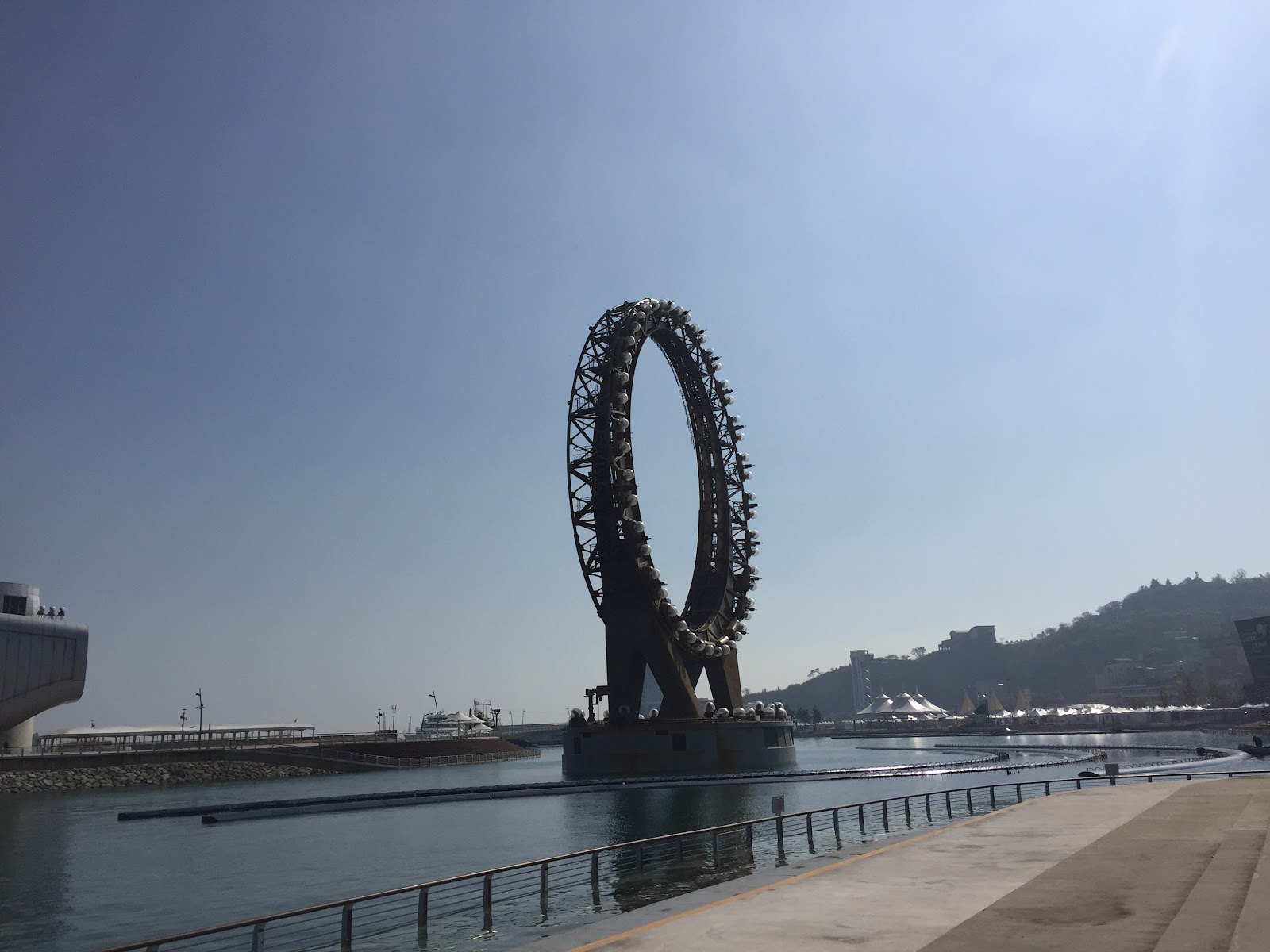 A landmark that is still prominent at the expo grounds is the Big O - a structure that was used in a multimedia show during the expo. 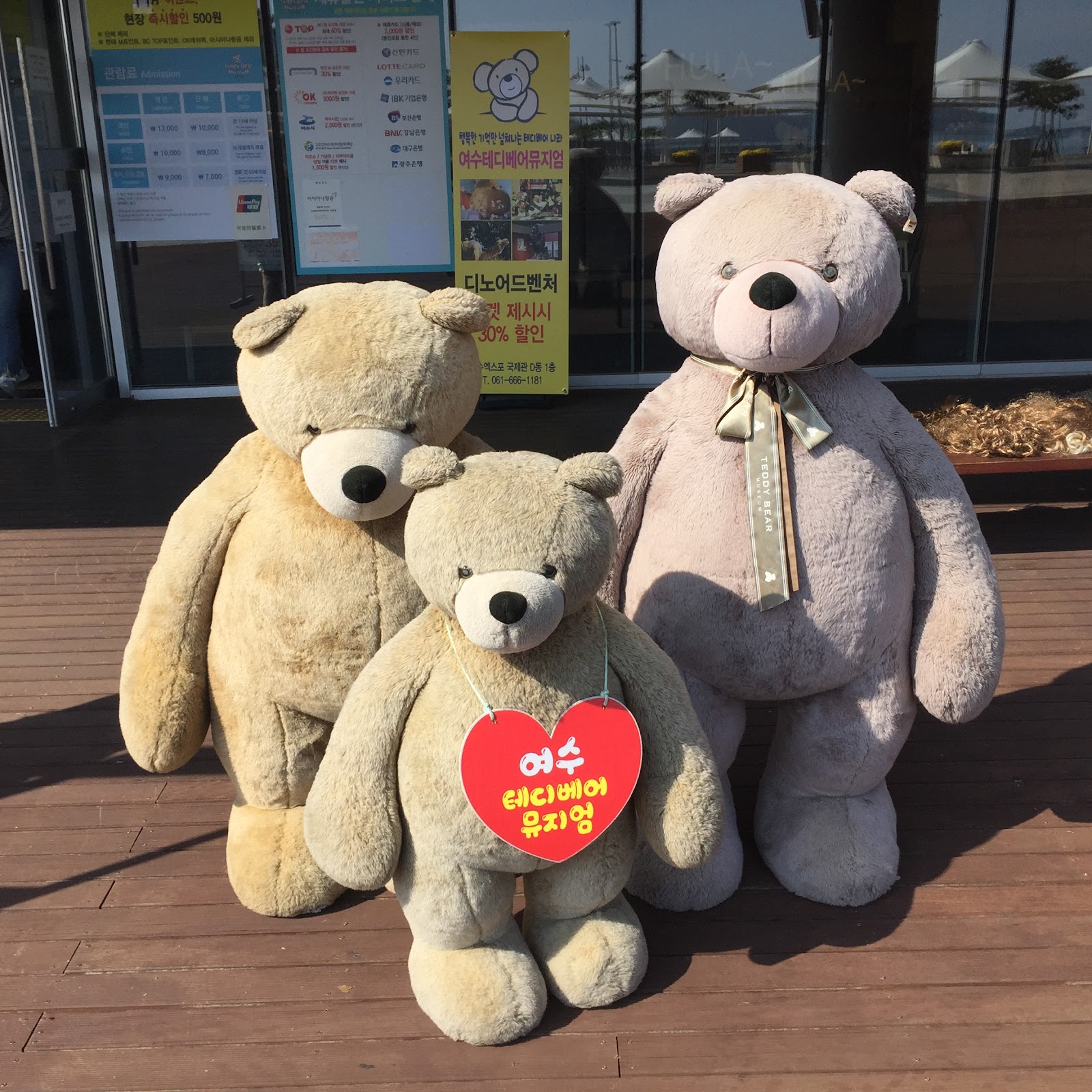 Other attractions include a Teddy Bear Museum, Hotel, and playground.

After exploring the Expo grounds, I recommend heading to either the Yeosu Ocean Railbike or Yeosu Cable Car. While there are local buses you can take, hopping in a taxi is not that expensive and usually much quicker than waiting for the local buses as their frequency is not that high, even during the week. When I visited, I first went to the railbike and chose to enjoy the cable car ride at dusk to take in the nightscape of Yeosu. 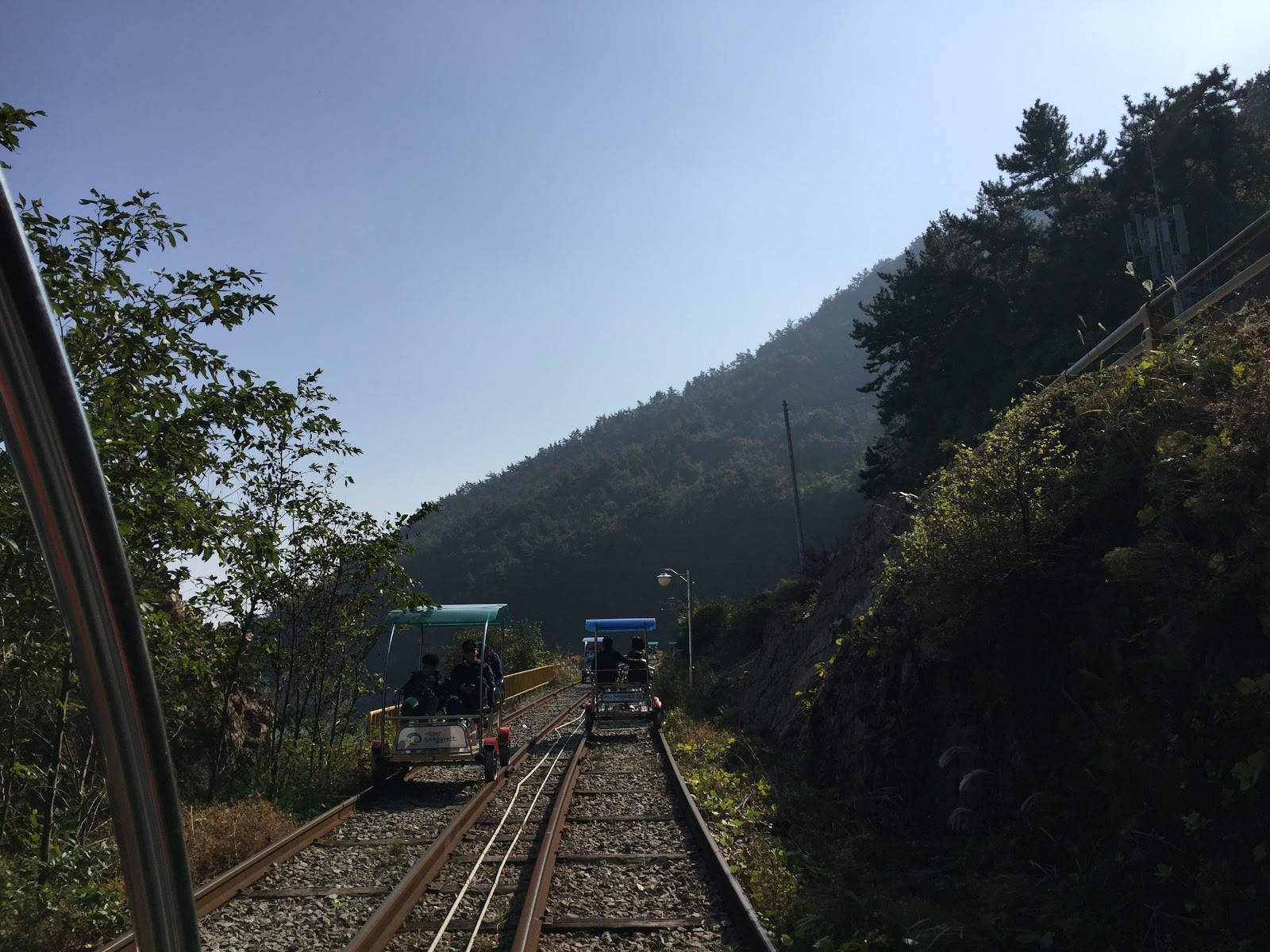 The railbike track is located right along the edge of a cliff which gives a great ocean view of the coast. The 3.5 kilometers (~2.2 miles) of track include not only a coastal view, but a tunnel as well. After riding down the track, a turntable at the end swings you around to pedal back up to the starting point. And don’t worry, the bikes are geared to be easy to pedal, even uphill. 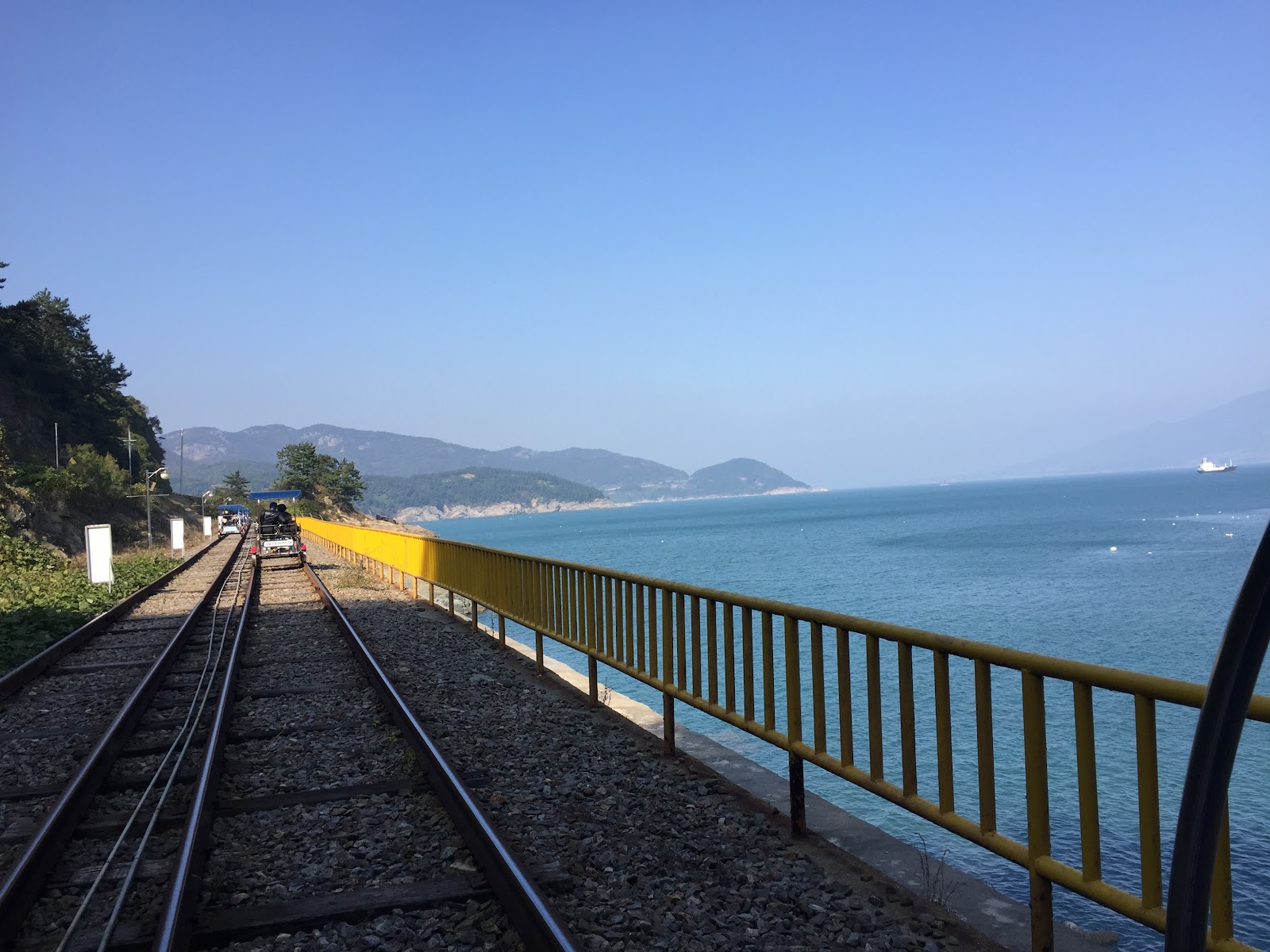 Pricing starts at KRW 20,000 for two people and increases by KRW 5,000 for additional riders up to four. The bikes accommodate a maximum of 4 riders so if you have a large party you will have to ride on separate bikes. 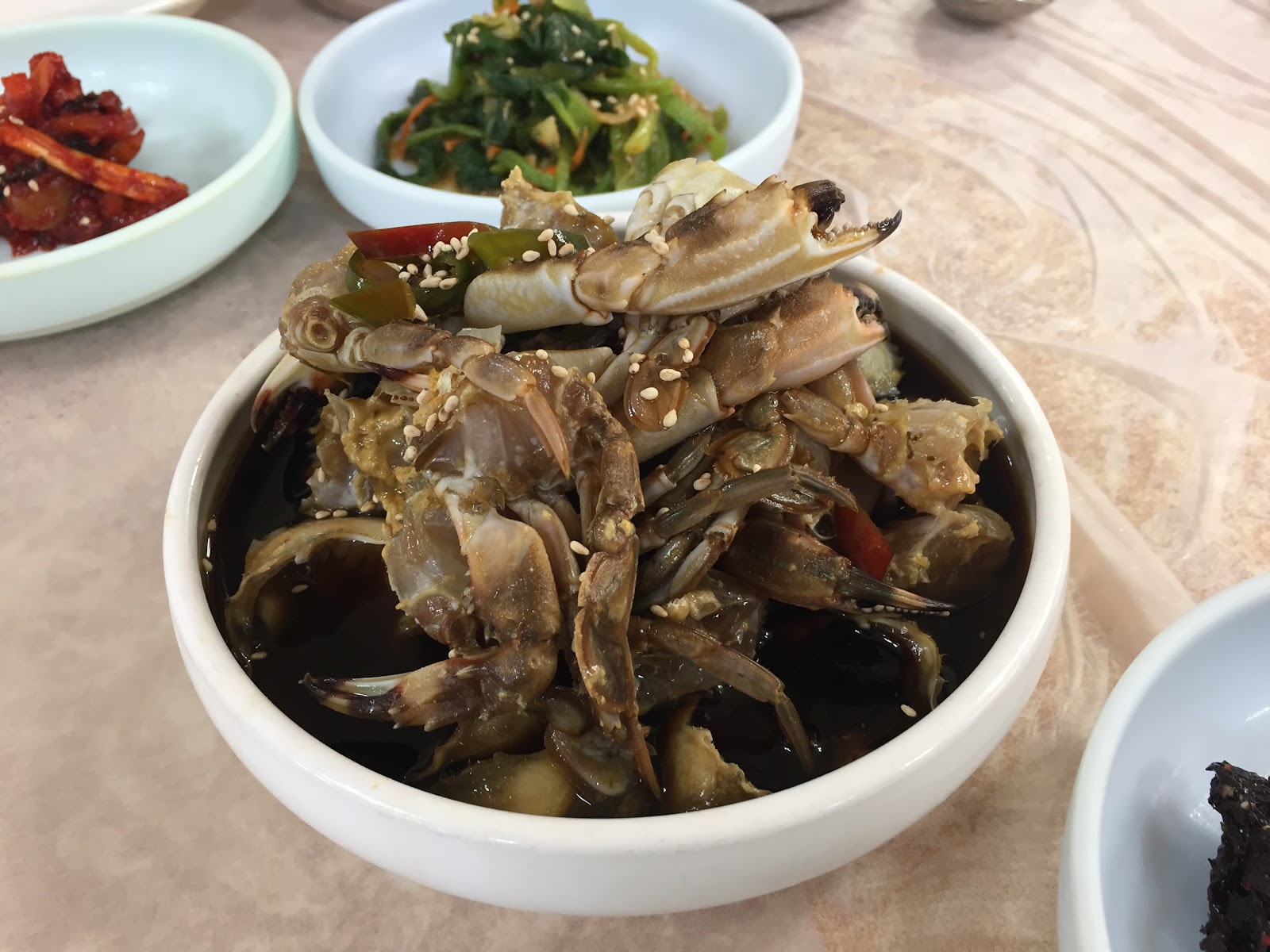 After all that pedaling, how about enjoying a local specialty of Yeosu: 간장게장 (Soy Sauce Crab)? This representative dish of Yeosu is made by marinating raw crabs in a soy sauce based sauce and served with rice and a variety of side dishes. There is a new variant called 양념게장 which uses a spicy red pepper based sauce as the marinade. 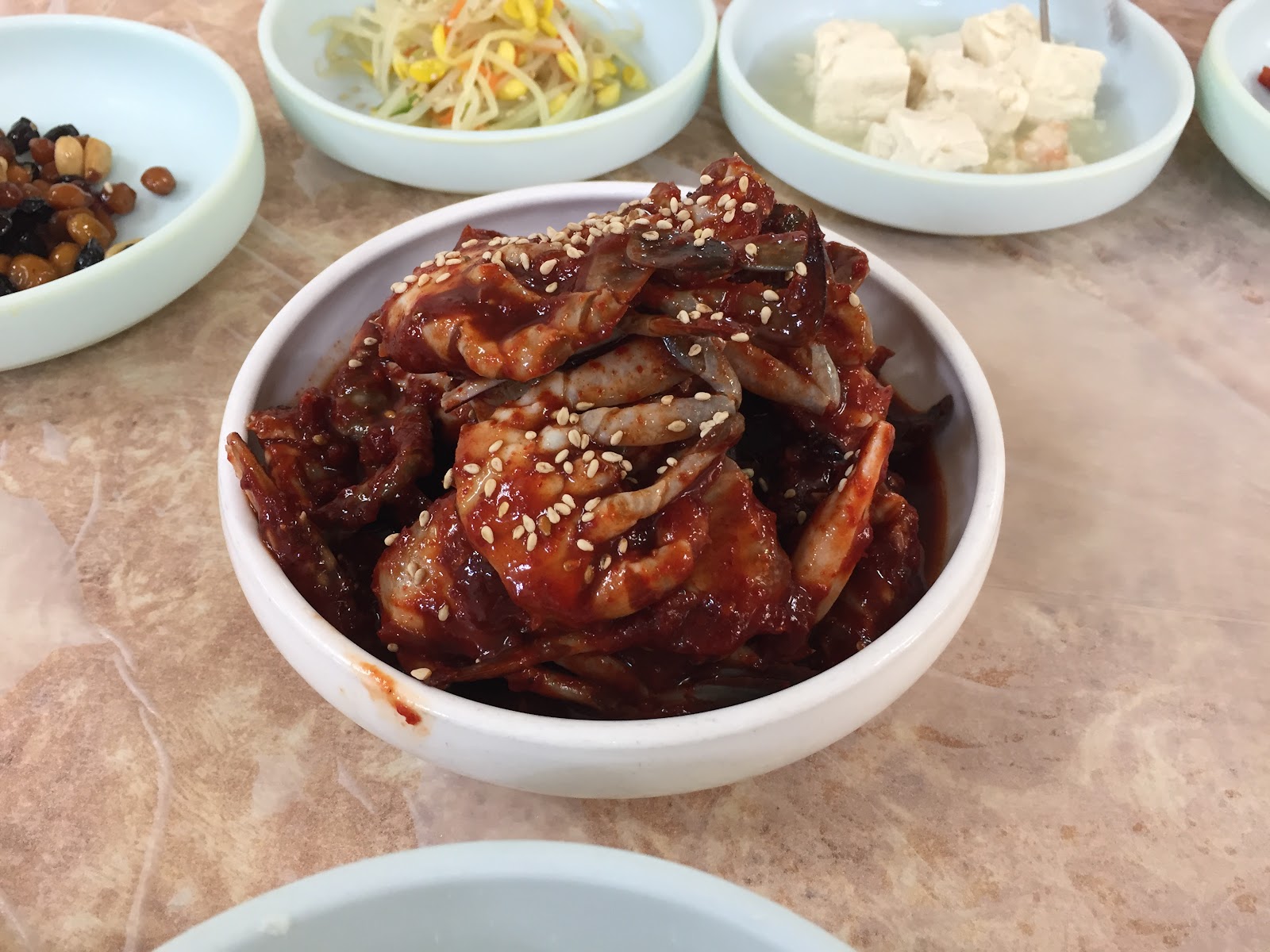 Eating this dish can be a bit challenging but as long as you are willing to be a bit messy, it’s not that difficult. The crabs are usually quite small so the main meat that is eaten is from the body. Removing the legs from the body and then gently squeezing the shell releases the meat. Eating with your hands and using your mouth to get the meat is perfectly acceptable. Price per person was only KRW 8,000 and included a variety of side dishes, both types of crab and Korean stew. 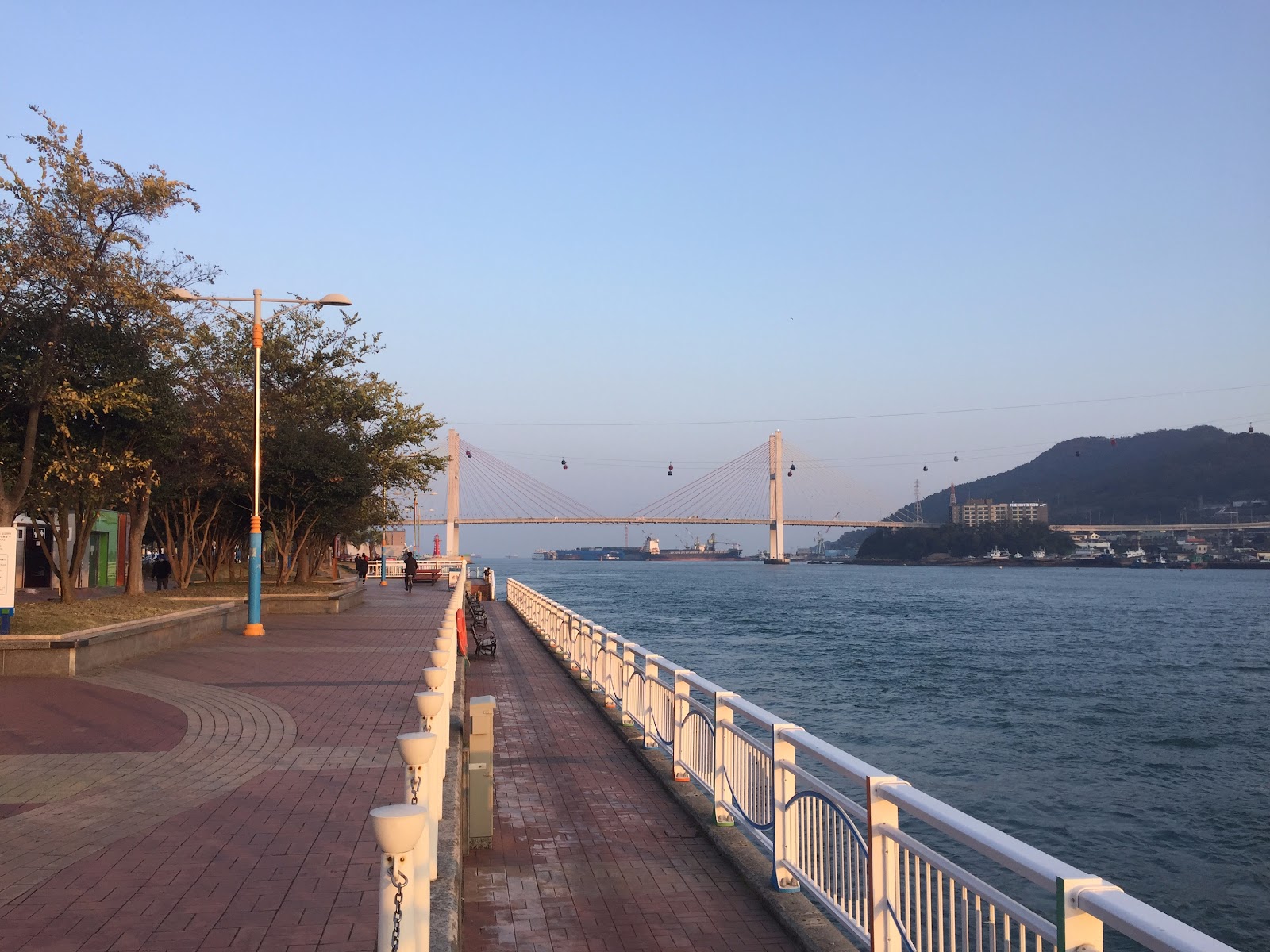 With your stomach full, how about enjoying the views of Yeosu from a cable car suspended over the sea? You can see the cable car line in the picture above running parallel the bridge. The cable car is accessible from either side and round trip tickets are available. Pricing for the cable car is as follows:

Each station of the cable car has a variety of convenience facilities such as convenience stores, cafes, food/beverage options, restrooms, and observation points. 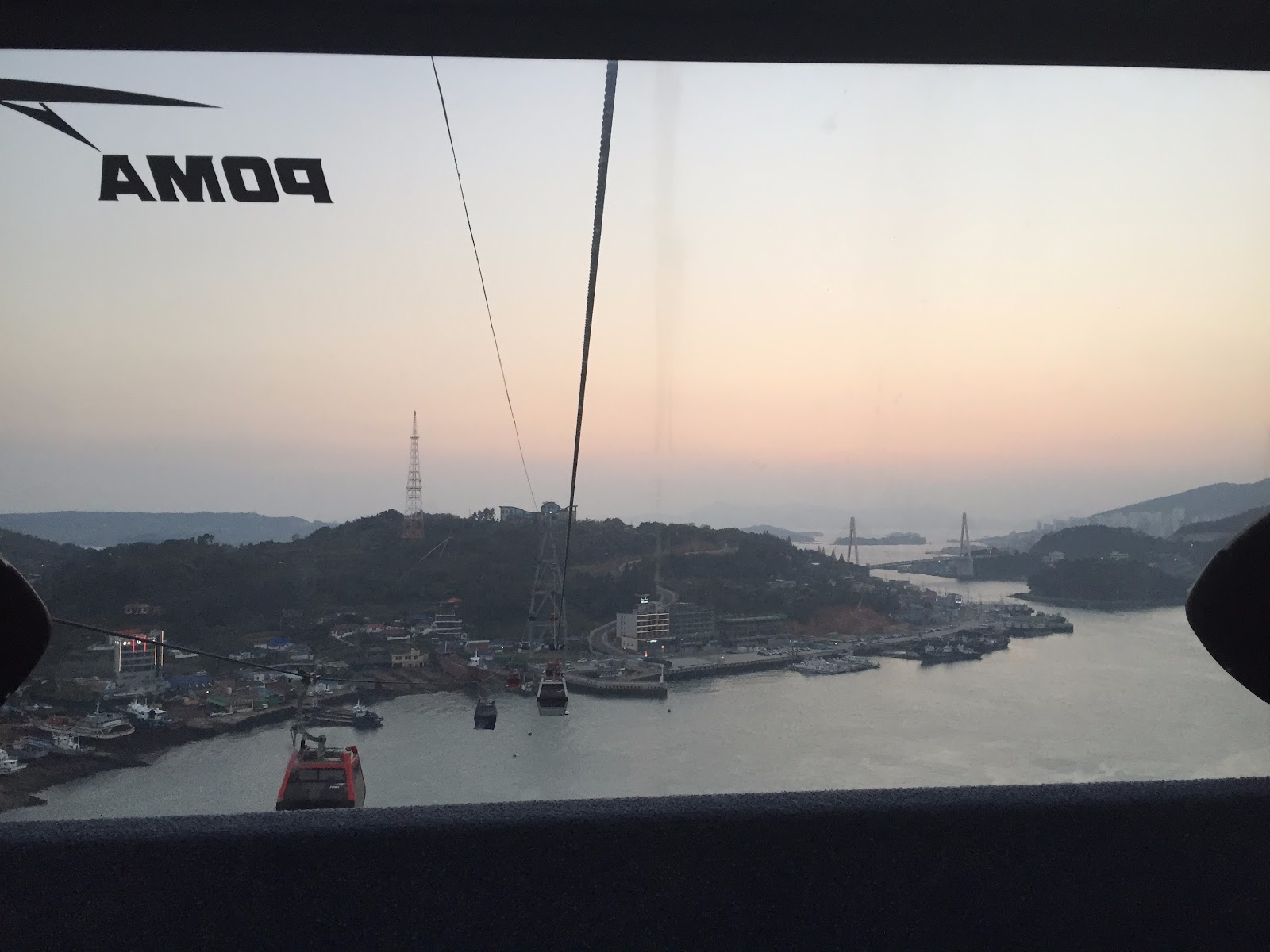 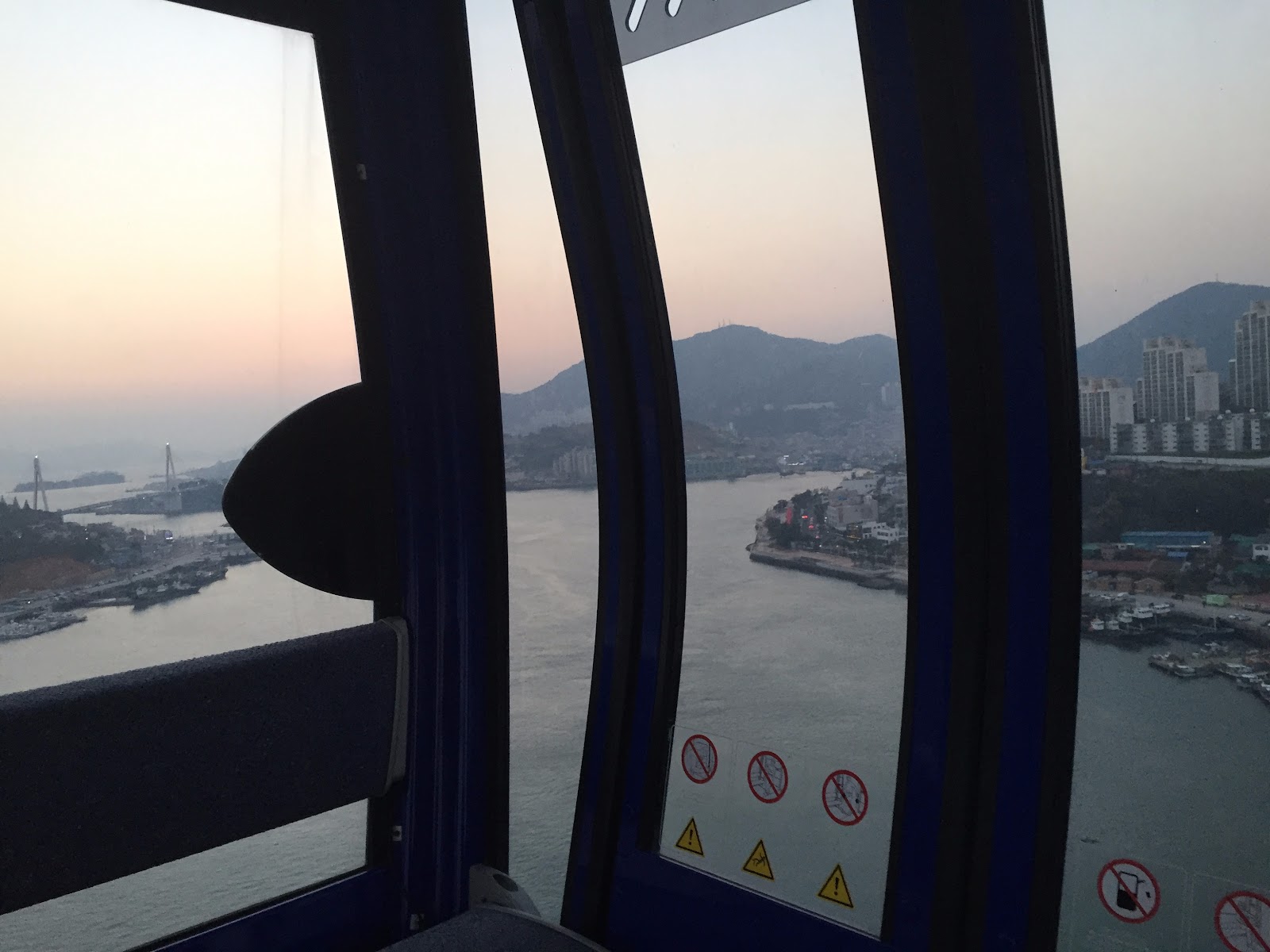 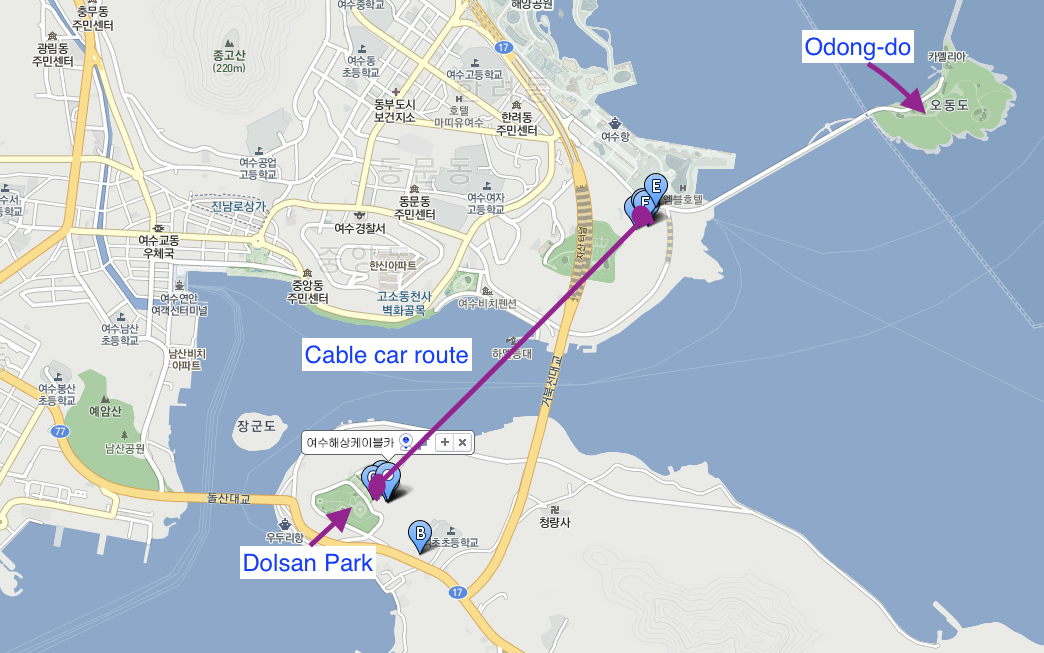 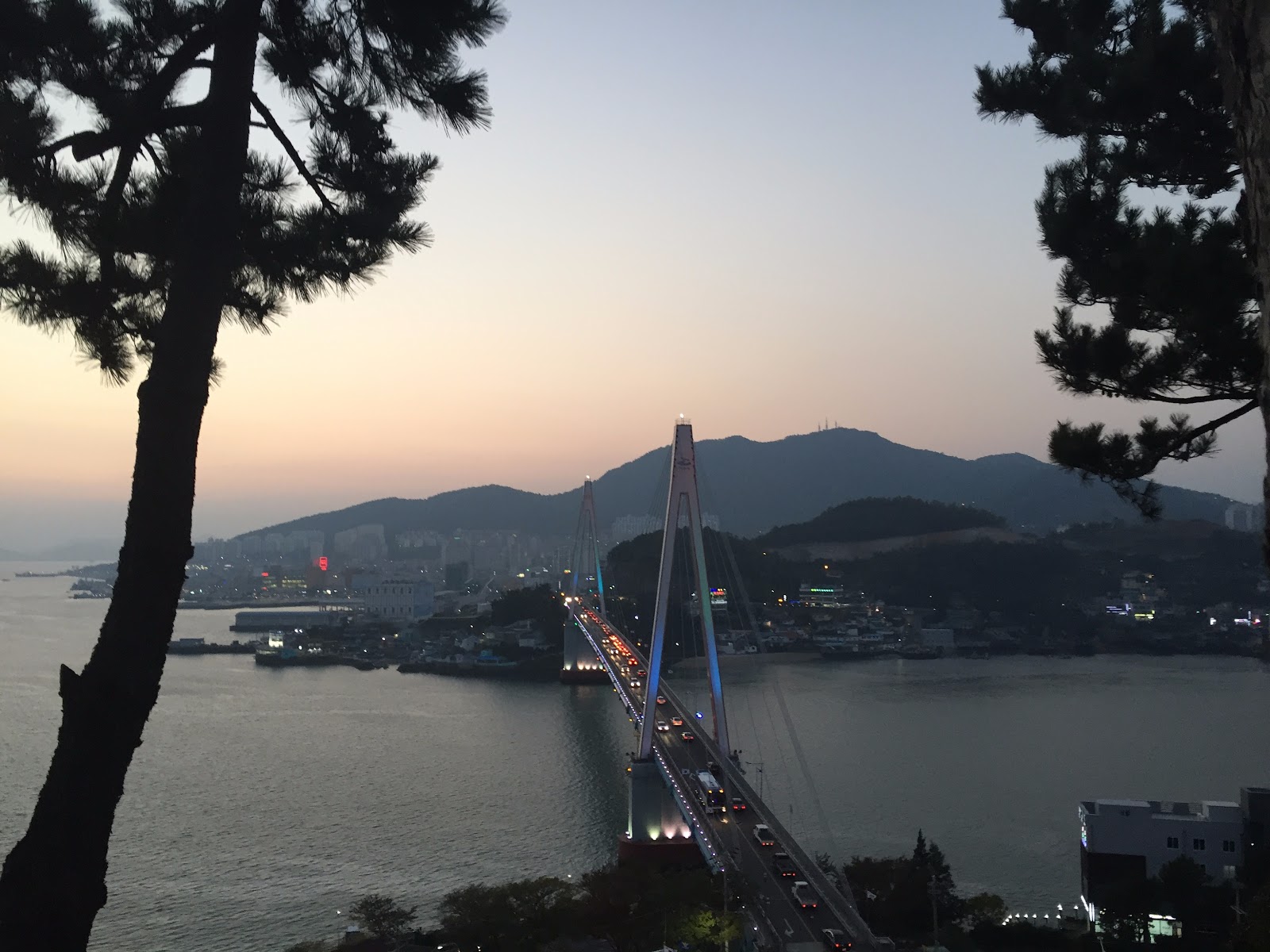 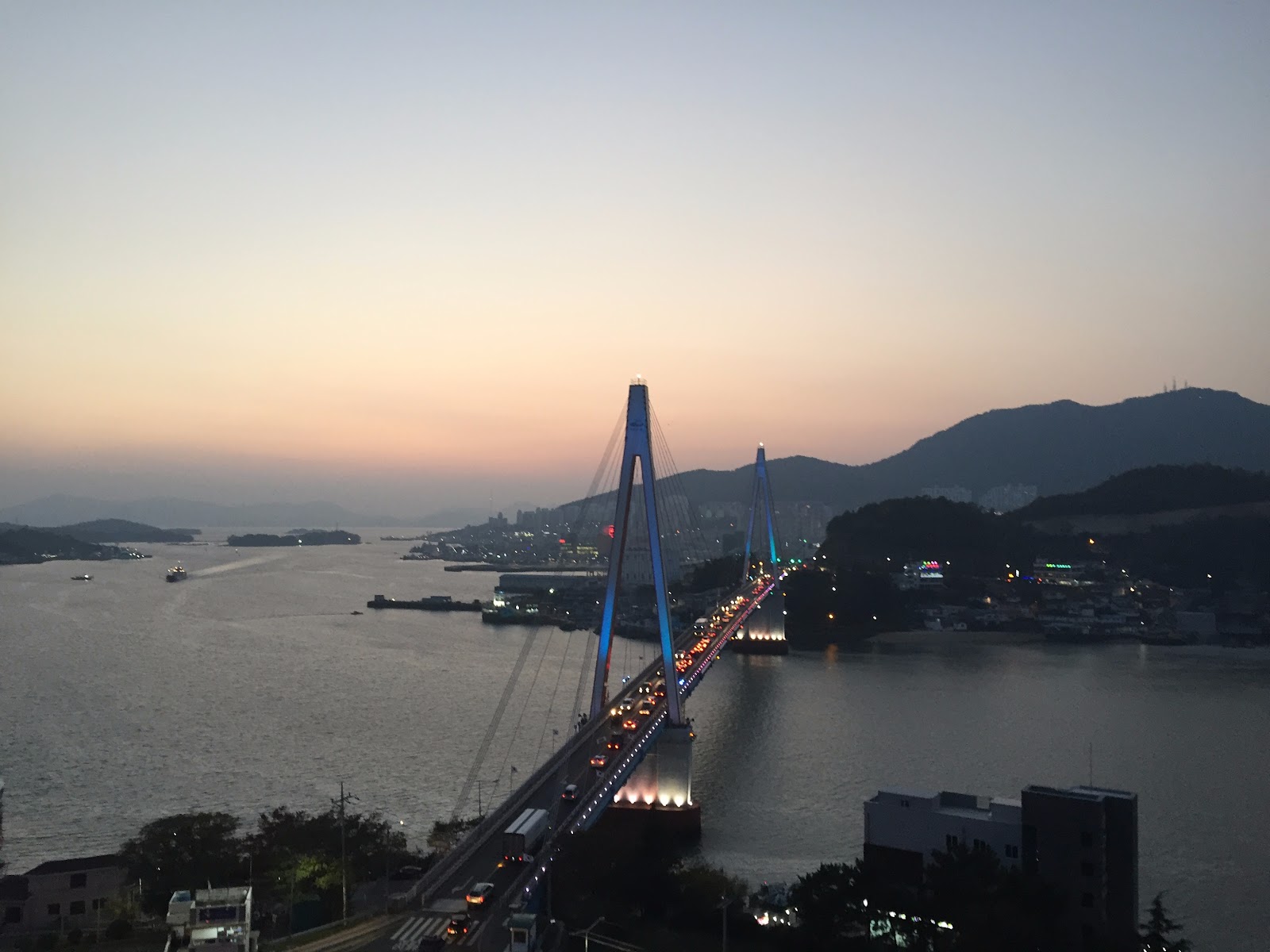 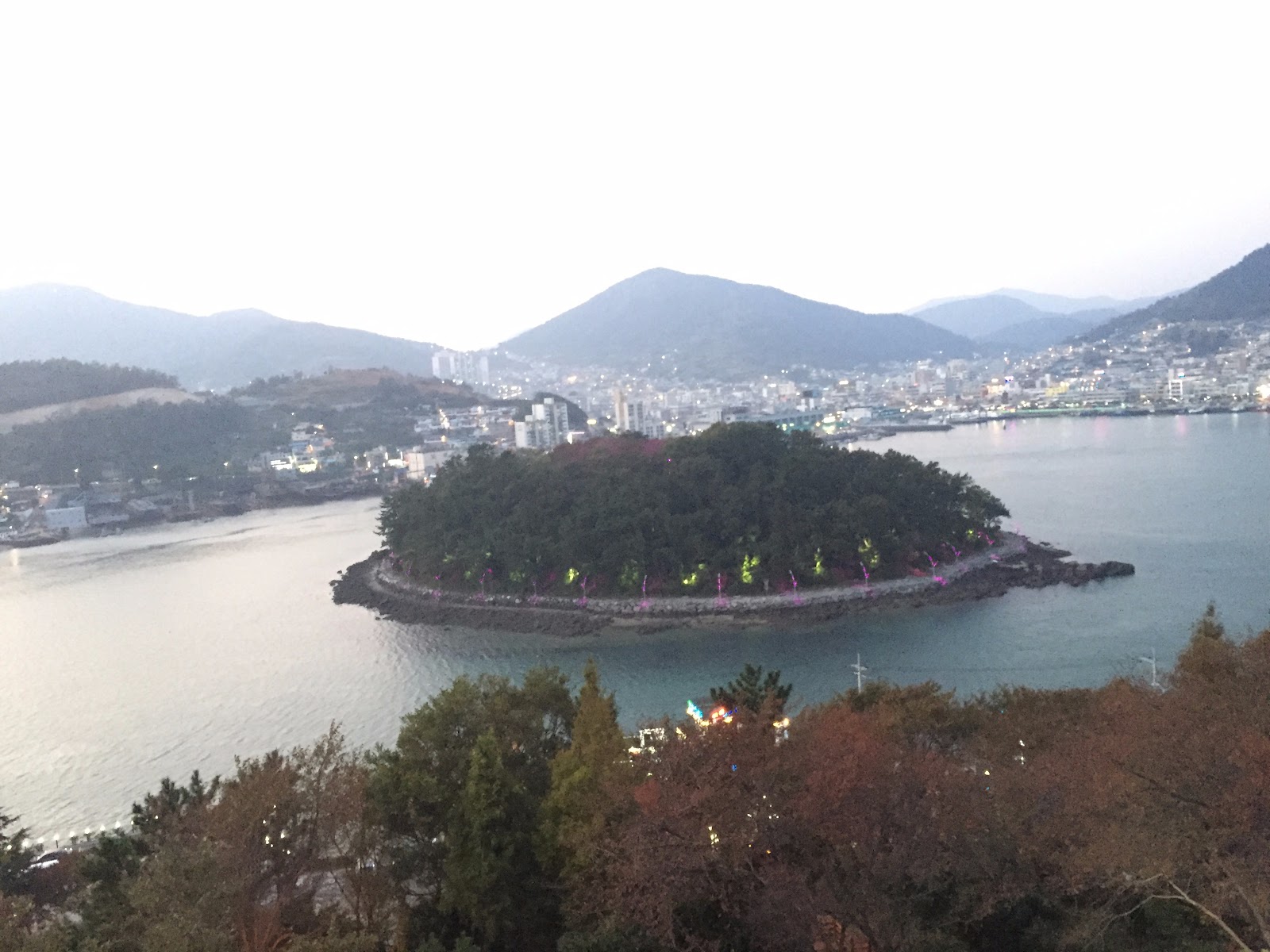 “Dolsan Park, located across from Dolsan Bridge, was created in 1987 on land spanning over 287,000 square meters. A teahouse inside the park was originally a TV drama shooting set. The teahouse offers a fine view of Dolsan Bridge, so visitors often stop by to drink tea while enjoying the view. The view point at the park also overlooks magnificent sunsets over Dolsan Bridge and exquisite night views of Dolsan Bridge, Marine Park, and Janggundo Island. The Memorial Time Capsule, containing various materials related to the merger of Yeosu city, was buried at the center of park in 1994 and will be opened in 2094.”  -Korea Tourism Organization- 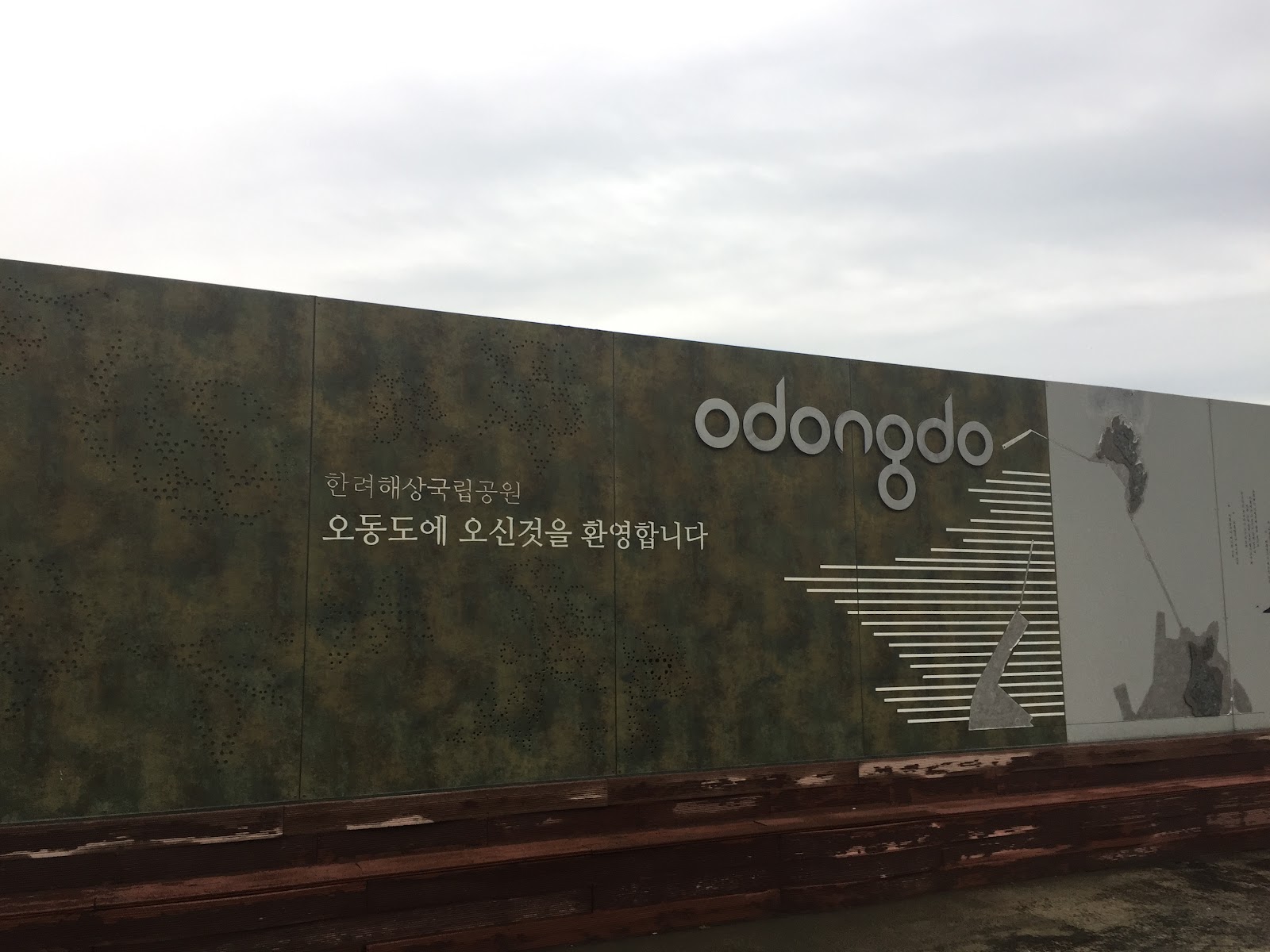 After exploring Dolsan Park, head back to the other cable car terminal to explore Odongdo, a small island off the coast of Yeosu. It is accessible via a breakwater path you can travel on by foot. 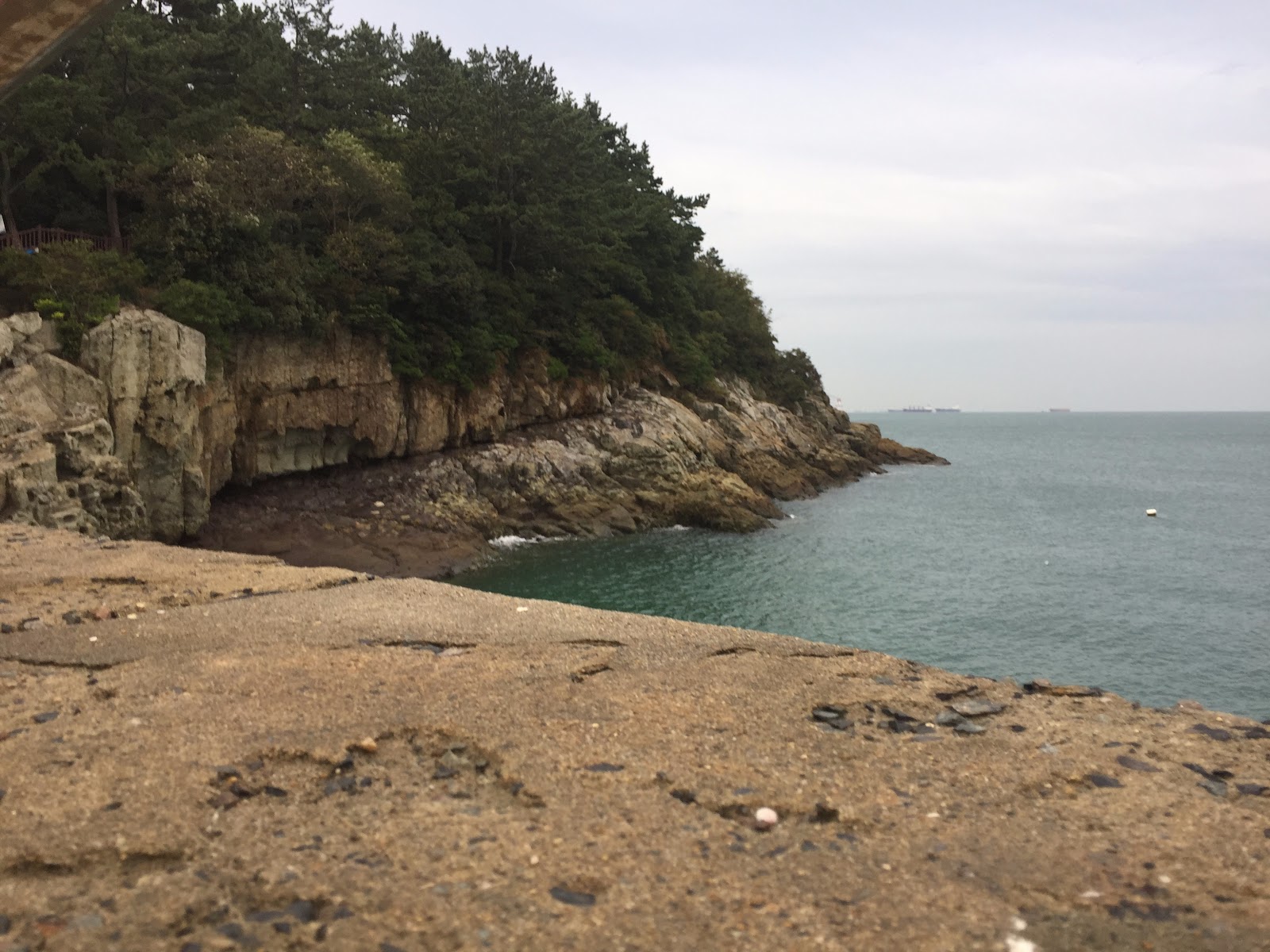 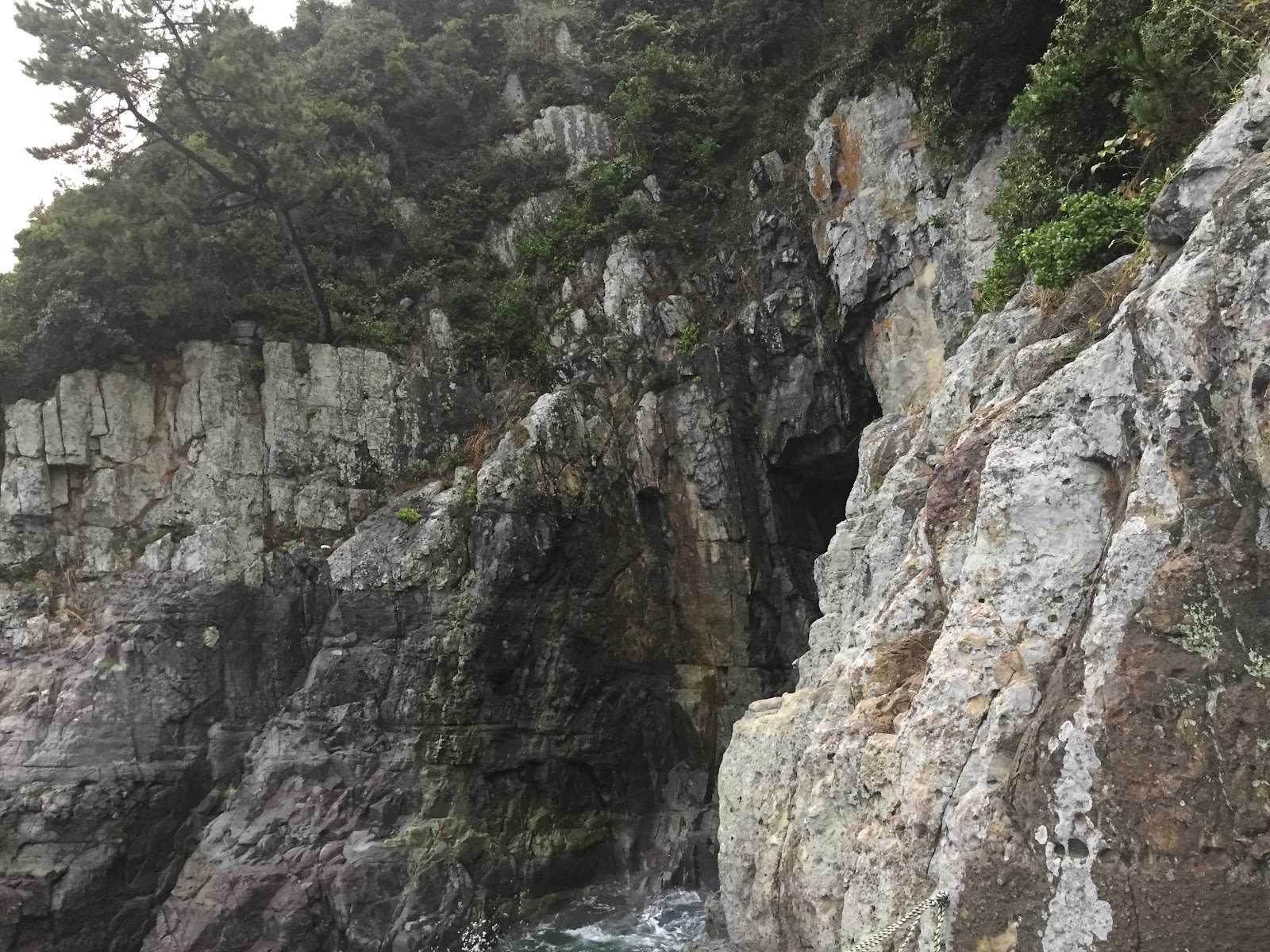 Besides the various trails on the island, Odongdo features the “Dragon Cave” carved into the side of the island letting seawater rush in and out. 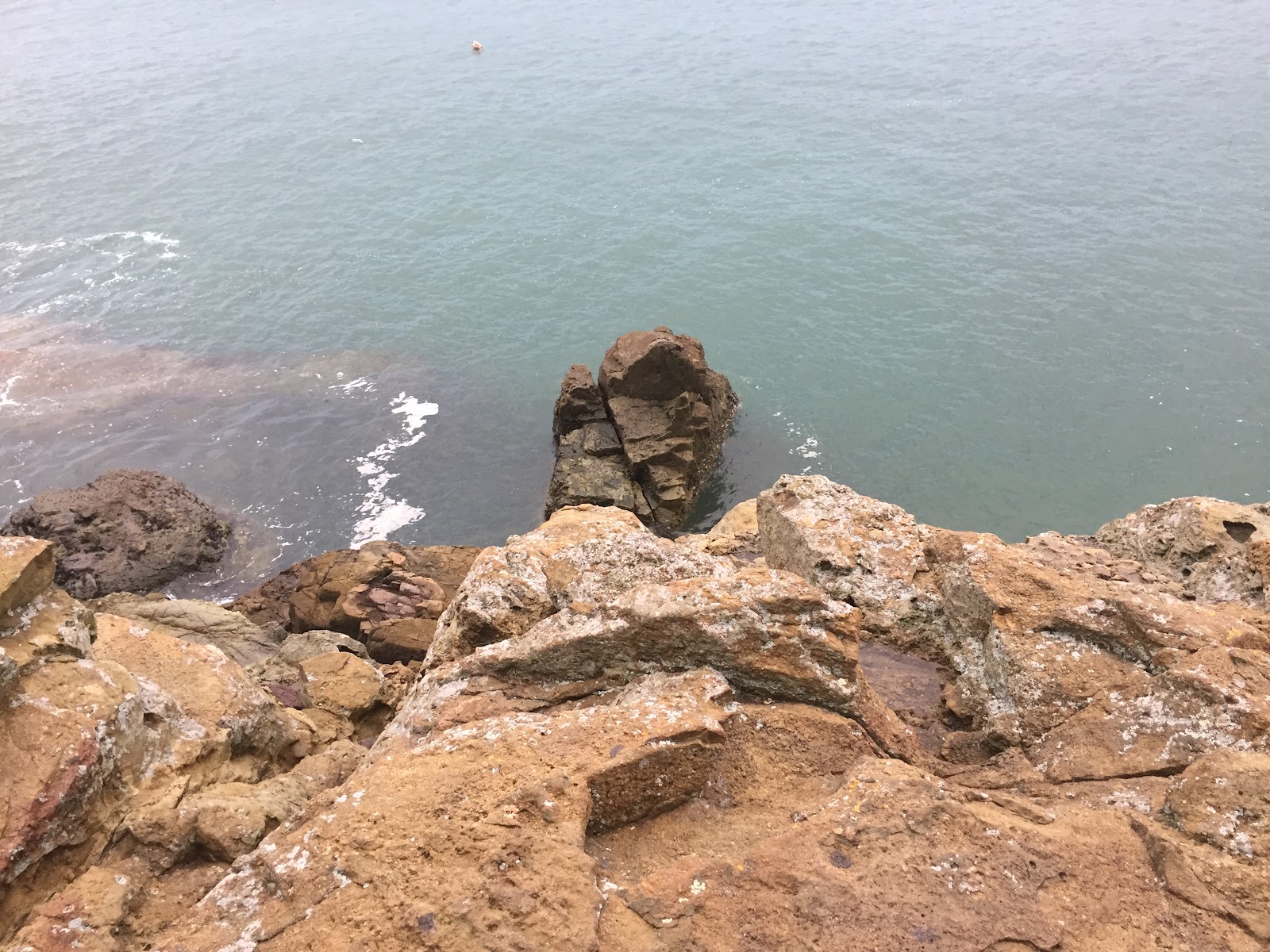 The view from the observation point of the Dragon Cave, looking over the cliff. 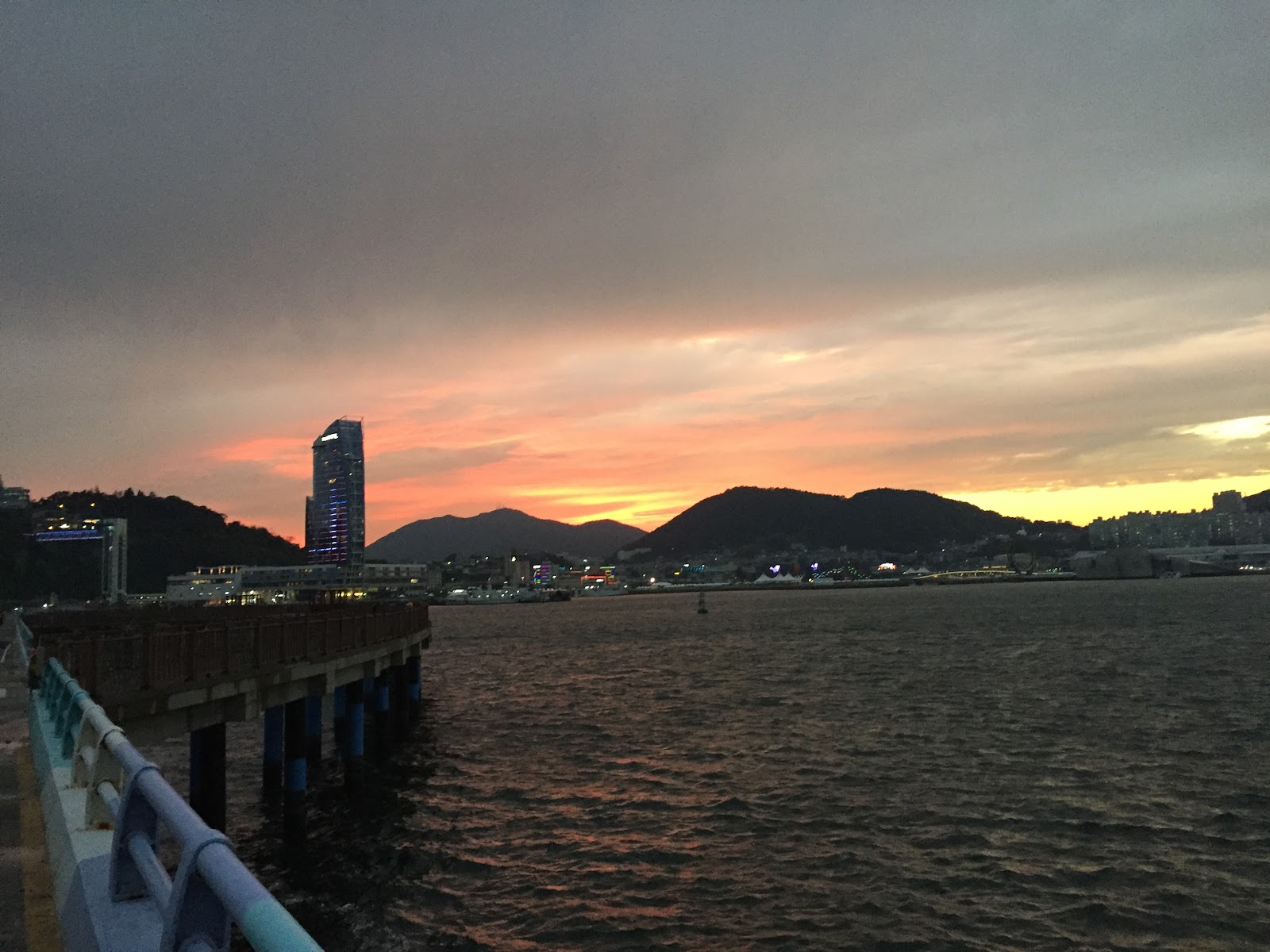 Also popular is the promenade on Odongdo which is a prime location for viewing the sunset or sunrise over the sea.

There are a number of guesthouses and pensions in the area as well as hotels. While Yeosu is not a large city, there are options available to suit a variety of budgets. Doing a quick search on Daum Maps reveals many guesthouses and hotels near the train station: 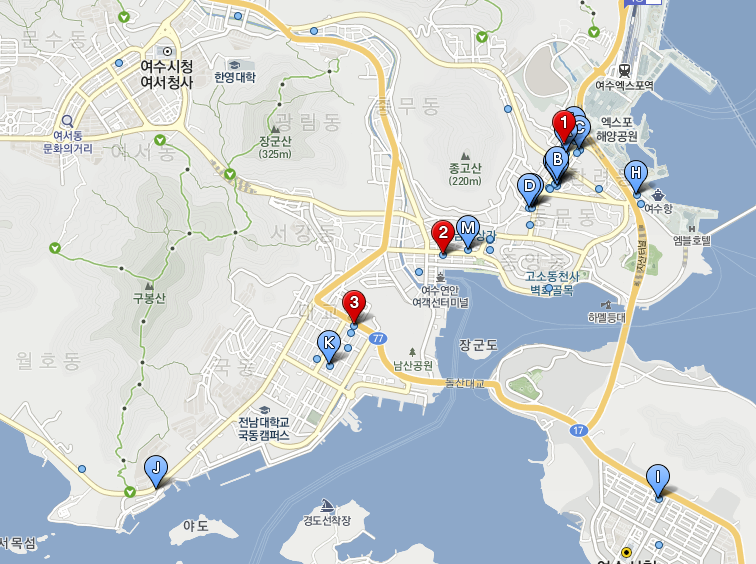 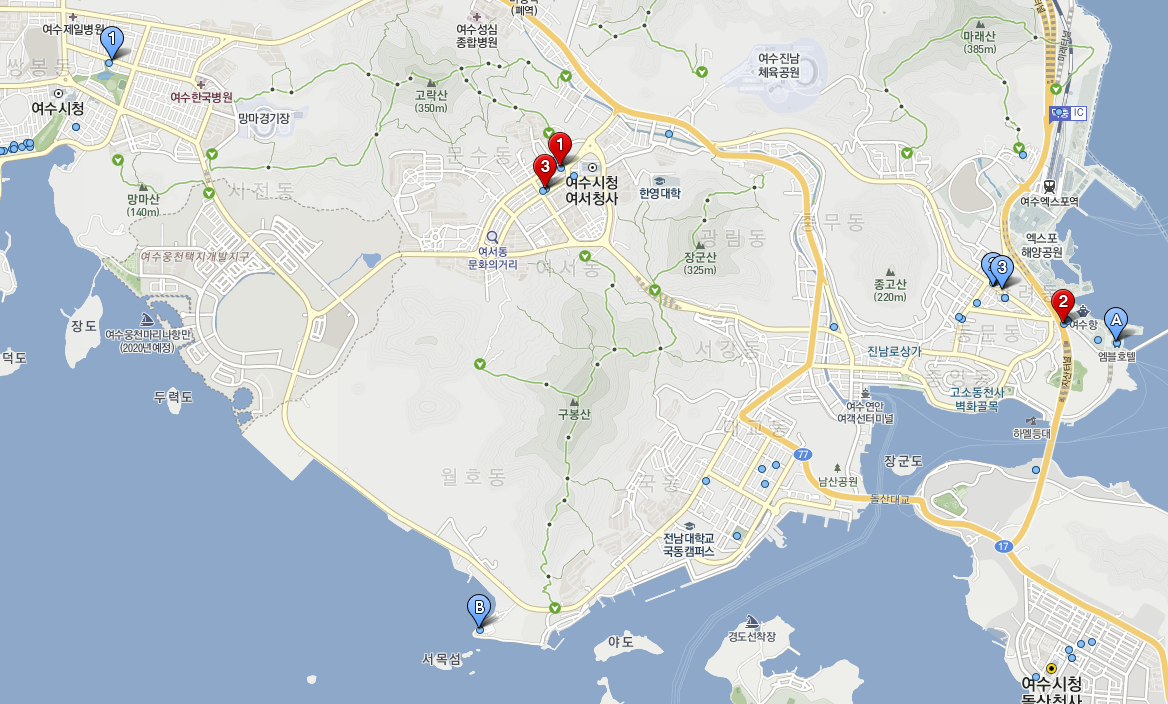 Look for the upcoming blog post regarding Suncheon! In the meantime, if you have any questions, contact the G.O.A.’L Community Mentor!