“Subtle Asian Traits” is a Facebook group made up of over 1.4 million members. The group was originally created by a group of Asian high school and university students living in Australia who started sharing memes (funny images) about their experiences growing up in Asian-immigrant households. The topics range from the culture-clashes associated with being Asian in a foreign country, disputes with parents, and a shared love of K-BBQ and bubble tea.

The group allows any of its members to post relatable and amusing memes, and despite its humorous beginnings, it has also become a type of virtual safe space for Asians, created entirely by Asians. People have started to move away from only funny pictures and have started to share personal stories, ranging from dating experiences to heartfelt, honest stories about abuse and illnesses. Because of the highly relatable content, the group has become international, reaching Asians all over the globe.

This group has also played a small, but still significant, role in connecting Korean adoptees, some of whom had joined and decided to post and speak up. One adoptee posted:

“I’m adopted from South Korea. Lived in the United States my whole life. I have never gone back to Korea or met my biological parents. I want to plan a trip to Korea and try to find them this summer. Is this a good or bad idea? Any thoughts or comments would be greatly appreciated!”

The post got over 700 likes and nearly 300 comments, with people reaching out by offering advice or giving words of encouragement. Several other adoptees shared their own experiences with racism, growing up with a non-Asian family, and the search for their identity. International Asian adoptees have even created their own Facebook group called “Subtle Asian Adoptee Traits” to share their own memes and stories. The group is private and adoptees only, to make sure the space is kept secure and safe for adoptees.

As the original “Subtle Asian Traits” group has gotten larger, spin-offs have popped up all over social media including “Subtle Asian Dating”; a group where people post pictures and descriptions about themselves or their friends who are looking for some romance. This group, commonly referred to, almost ironically, as SAD, is bursting with dating and relationship related memes.  Other groups include “Subtle Asian Fitness”, “Subtle Asian Makeup/Beauty Squad”, “Subtle Asian Mental Health”, and many more. 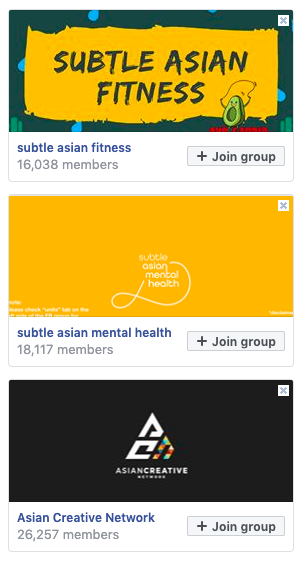 One reason for the groups’ popularity stems from the fact that people don’t have to explain the joke punchlines, since everyone else in the group shares a similar background. This sense of shared understanding is especially appealing since it is often difficult to explain every single detail of Asian culture to non-Asian friends. Sometimes, all a person wants is for someone to just get it.

Recently, the group has been encouraging people to share more about their Asian culture with non-Asian friends. Having a supportive Asian community at their backs, virtual or otherwise, people have started to become proud of their culture and are opening up more to the idea and practice of discussing and embracing their culture.

Here are the links to the Facebook groups if you want to check them out!